By Matteo Ferraguto and Markus Maier

Private Equity funds have made a name for themselves in the world of finance for consistently producing high returns, often outperforming benchmarks such as public markets. But how has this been achieved? Over the years, many measures such as certain financial engineering techniques, cost cutting strategies, and buy and build, have been developed to produce those high returns. These measures’ impact on returns can be analyzed using three major categories, called value drivers.

The first one of those value drivers is called deleveraging or cash flow effect and describes the effect of generating cash, which can then be used to pay off the principal amount of debt facilities or to pay shareholders in the form of dividends. Stable Cash Flows are generally produced by healthy, mature businesses. Additionally, PE companies have tried to extract extra cash by lowering the net working capital of their portfolio companies or by selling off assets.

Secondly, PE companies have boosted returns through multiple arbitrage which is the effect of selling companies for a higher multiple on an income metric (usually EBITDA) than they acquired it for. This can be initiated by strategically buying companies for relatively low multiples, e.g. out of a distressed situation, or by having access to inefficient and merely covered markets. Additionally, timing plays a crucial role, as multiples change with economic cycles.

The third factor, operational improvements, is measured by the increase in income (usually measured by EBITDA) that has been achieved over the holding period and can be driven, broadly speaking, by a combination of two changes: increasing revenues and expanding margins.

The implementation of operational improvements by PE funds

There are many different options for a PE fund to implement changes in their portfolio companies. Which measures they eventually take is very dependent on the industry and type of deal. Throughout the industry, one of the most frequently applied strategies is consolidation through M&A in order to increase market share. This may lead to value creation through synergies since PE funds can use their proven systems for M&A implementation on the acquired companies and profit from economies of scale. This, however, is a high-risk high-return measure since M&A activity requires substantial capital and bears risks that may not be foreseeable at the time of the transaction. It is also important to notice that the mere acquisition does not create any value. Only if the synergies are realized through the operational team value, has been created.

The second most common strategy is probably cost-cutting which aims at increasing margins. It is popular because cost-cutting skills are often transferrable among industries and PE funds can build up substantial knowledge that can be applied to most of their portfolio companies. Some of the most prominent cost-cutting measures are reduction of purchasing costs, SG&A overhead reduction and streamlining of processes.

The last big pillar of operational improvements is improving sales. PE firms have tried out risky strategies in order to boost the sales of their companies. Measures include pricing, development of new products, and entering new markets. PE-backed companies might have an advantage over their peers in this area, as they can support their portfolio companies over many years with capital enabling them to think longer term than companies under different ownership.

Over the history of institutionalized PE investing, operational improvements have become increasingly important. While only a small factor in the 1980s, it has become the most important driver of returns in today’s world of PE investing according to a study by global consulting firm BCG. Today, almost 50% of value creation can be explained by operational improvements. Other studies back this claim up, showing that most returns come from such improvements. A study conducted by the Technical University Munich and Capital Dynamics in 2014 for example shows that operational improvements account for 37% of all value creation and for 57% of non-leverage effects. Looking at PE firms, it is apparent that they have gone great lengths to ensure the improvement of their companies. Some have hired armies of strategy consultants in order to design growth strategies or implement cost cutting measures. This has attributed to consultancies having big PE task forces, which can cover the whole life cycle of a PE deal from due diligence up to the eventual sale. Other funds have implemented their portfolio management divisions with highly trained professionals like KKR did with KKR Capstone. These divisions build a bridge between the investment team and the management of the companies. Some funds, for example Bain Capital, have shifted their focus regarding value creation towards operational improvements. 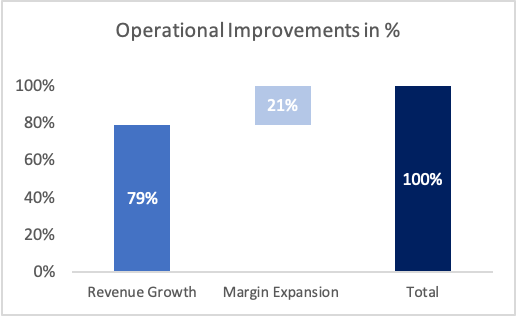 As already discussed, operational improvements can be further analyzed by splitting them up into revenue growth and margin expansion. Having a first glance at analysis done on this topic, such as this study by the consulting firm Duff & Phelps on 28 buyouts in the US, it seems as if revenue growth has played a larger role in value creation. However, revenue growth might be overrepresented through M&A transactions, which happened during the respective holding periods. Additionally, growth in revenue is further driven by the growth of markets as a whole, something that the portfolio companies profit from, but which is not triggered by the specific management of the portfolio company. The decomposition of revenue growth shows that most of it comes from factors that are not attributable to the skills of PE investors. The decomposition of margin growth, however, shows a different picture as more than half of the value creation from margin expansion comes from the PE investors’ skills. Consequently, of the total value added by operational improvements, 20% might be based on the PE investors skills with 9% coming from improvements in revenue growth and 11% from margin expansion. This suggests that the impact of PE companies might be more apparent in making companies more efficient as opposed to growing them. It is interesting, however, that PE-backed companies seem to outperform their peers substantially with regards to operations. It must be noticed, however, that the data shown might be impacted by selection biases: In the end, only companies who take operational improvements seriously might search for advice and therefore are included in a study like this.

Even though the analysis shown is only based on a small sample of PE-backed firms, the impact of operational improvements might help to explain parts of the outperformance of PE as an asset class over other equities. However, it must be stated that the research might also suggest that even though operational improvements as a whole seem to be the biggest value driver, the largest gain initiated by the PE investors might actually come from multiple expansion. This leads to the question of whether PE firms can maintain their high returns when markets become more efficient and sourcing of relatively cheap deals becomes more difficult. It is highly unlikely that significant changes in PE funds’ ability to buy low and sell high can be compensated by improving their operating improvements skills. This would lead to great challenges for PE funds in the future, as they try to maintain their level of performance. A convergence of performance of PE funds with public markets might already be on the horizon. The public market equivalent of the S&P 500 has converged to the performance of buyout funds in the US in recent history, suggesting that PE funds have troubles outperforming their public competitors. This might lead to pressure on the heavy fees that were charged by GPs in the past and it might be difficult to maintain them in the future. Therefore, it seems more important than ever for PE funds to improve their strategical and operational skillset in order to keep outperforming benchmark such as public markets and present a competitive asset class in the future.