By Nikolas Huber and Filippo Rosaschino

Levels of dry powder within private equity have skyrocketed in recent years as a result of an increasingly saturated market for suitable investment opportunities. Private equity funds are now searching for new methods and structures to invest their large capital stockpiles. But what if a very pragmatic solution has already been discovered that is just too unpopular to be considered? This article analyzes said possible solution, namely Club Deals, and attempts to outline the PE construct as well as develop a glimpse of its potential.

Firstly, let us blueprint Club Deals within the private equity industry and their implications. By definition, a Club Deal is a PE transaction which involves several different PE firms and funds. The concept can also be referred to as a consortium or syndicated investment. A Club Deal transaction can take the form of a buyout or some other style of assuming a controlling interest in another company. This collective approach to a transaction enables each PE party to participate in the entry of higher value investments, which could not be feasibly acquired individually. 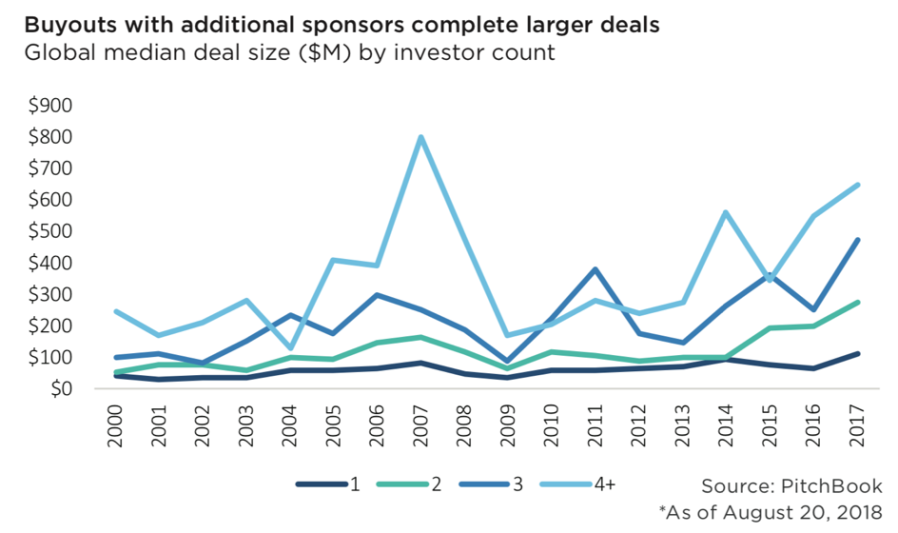 Like lying on a bed of nails, another incentive for participating in a Club Deal can be the wider distribution of risk. Furthermore, the more parties involved, the more different points of view and expertise are brought into the consortium, which should enhance the overall probability of success. From these points, it follows that debt financing is typically less expensive when lenders notice that multiple PE firms are involved. The primary goal, as it is with most buyout transactions within PE, is to improve and polish a target with the clear intention to sell it after a fixed period of time.

Accompanying the advantages of Club Deals are several possible points of hesitation. Firstly, there are severe concerns about the regulatory practices concerning Club Deals. This is closely related to the evolving issue of “market cornering”. Because of the empowered market position of PE syndicates, which enjoy reduced competition in the bidding process since several potential stand-alone buyers are grouped into the syndicate, Club Deals enable PE companies to manipulate the market within certain boundaries. Moreover, critics upbraid Club Deals for having too many decision makers, which can be especially troublesome when things go poorly as no party assumes complete control. Additionally, many limited partners (LPs) of PE funds complain that they incur fees from multiple PE companies for the same transaction. Finally, incentives may differ if general partners (GPs) are on different exit timelines due to the specific vintage and dissolution of their respective funds. As a result of these complications, some PE firms forgo participating in Club Deals as an underlying principle of their company.

Club Deals were introduced in the U.S. in 1870 with a project of the Pennsylvania Railroad company. In the 1920s, there were already several groups of investors which engaged in the trade of securities. Between 1984 to 2007, according to a 2010 report, a total of 63% of U.S. venture capital firm investments were syndicated – this figure rose to 77% in 2000.

The years from 2003 to 2007 are known as the “the era of Club Deals”, marking the climax of the popularity of Club Deals which came to a disruptive end caused by the financial crisis. Additionally, since 2006, the Department of Justice’s antitrust investigations led to a downturn in this kind of activity.

In Italy, the first company to engage in a Club Deal was TIP. It was created by Giovanni Tamburi in 2002, gathering funds from 150 wealthy Italian families for specific initiatives. TIP neither has a minimum number of individuals that can contribute to the fund nor a minimum investing requirement. The company has positioned its enterprise around leading companies in the Italian market, such as Eataly, Moncler and Prysmian.

The 2008 financial crisis was the impetus of the strong reduction in Club Deals as part of the overall amount of PE transactions. This is due to the very nature of Club Deals and their development which can be perceived as largely synonymous to the boom that culminated in the global financial crisis. There have been several notable investment catastrophes associated with Club Deals as well as cases of large-scale bankruptcies. 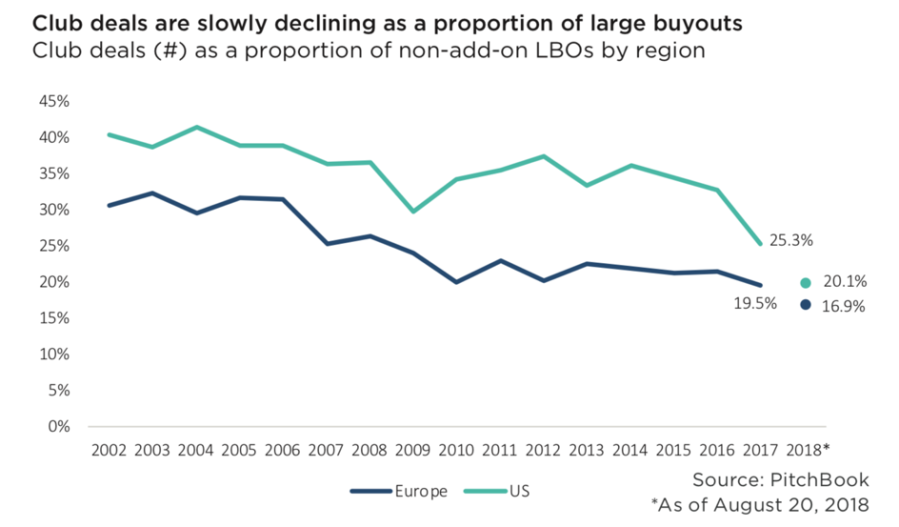 One example of such a big failure is the Toys R Us investment case. Toys R Us was once America’s biggest toy store. With the rise of online retailers, the toy giant began to face flat revenues and slumping profits. The board of directors of Toys R Us subsequently put the company up for sale in 2004 – PE funds then approached the company. Vornado, KKR and Bain Capital finally bought the target for $6.6 billion, piling up $5 billion of debt in the process. In order to compete with the likes of Amazon, Toys R Us would have had to invest heavily in its own e-commerce branch and shops, however it ended up using most of the available cash to cover its outstanding debt tab. As a result, the former toy empire eventually filed for bankruptcy in 2017.

Another example involves electricity generator TXU Corp. In 2007, private equity firms KKR, TPG Group and Goldman Sachs Capital Partners joined forces to purchase TXU Corp for $44 billion. In just seven years, what initially amounted to the largest buyout in U.S. history, would become the largest non-financial bankruptcy. Buyout funds could collect billions in debt with the snap of a finger at the peak of the private equity boom. In this instance, KKR, TPG Group and GS Capital Partners raised $40 billion in leverage to finance what seemed to be a fairly robust company. While the gamble was pricey, the buyout appeared relatively safe. The acquisition was signed on October 10, 2007, and the firm became known as Energy Future Holdings. Eventually the investment went awry as the firm was unable to meet its planned debt payments by April 2014 and was forced into bankruptcy later on. Energy Future Holdings was then split into two corporations: Oncor, a controlled electric utility, and Texas Competitive Electric Holdings. The latter is the firm that filed for bankruptcy, while private equity shareholders are still trying to extract value out of Oncor.

Although by no means a dodo, Club Deals are “endangered” in their diminishing relevance as a reasonable consequence of bad reputation. More suitable potential alternatives such as co-investments also may have advantages over Club Deals – we formulate a short definition of a co-investment: An equity co-investment is a minority investment in a company made by investors alongside a private equity fund manager or venture capital firm. Equity co-investment enables investors to participate in potentially highly profitable investments without paying the usual fees charged by a PE fund. Equity co-investment opportunities are typically restricted to large institutional investors who already have an existing relationship with the PE fund manager and are often not available to smaller or retail investors. As a result, LPs in such constructs tend to have more direct access for lower fees than those compared to Club Deals.

In order to highlight the reduction in Club Deals here are some numbers: in 2007, 27% of so-called mega deals included more than one PE fund, this number shrank to 4% in 2018. And indeed, most of the largest deals these days are either structured as a Limited Partners Co-Investment or via the formation of supersized capital pools. Between 2001 and 2004, Club Deals accounted for 39.8% of non-add-on buyouts in the US and 29.7% in Europe. By 2018, those figures dropped to 20.1% and 16.9% respectively.

In spite of the trending contraction in volumes, there have been some renowned and large-scale Club Deals in recent years.

In 2015, the private equity firm Permira teamed up with Canada Pension Plan Investment Board (CPPIB) to purchase Informatica, a California-based enterprise software provider for $5.3 billion. To enable the deal, banks provided $2.6 billion of long-term debt. This was one of the year’s most high-profile LBOs, particularly within enterprise software.

In 2018 Blackstone, Hellman & Friedman – alongside co-investors CPPIB and GIC, the Singaporean sovereign wealth fund – formed a consortium to explore a method to take Nielsen, the TV ratings business, private. Bain and Golden Gate acquired BMC, a software provider that helps companies run their IT operations, for just under $7 billion in 2013. Insight Venture Partners, hedge fund Elliott Management and GIC also participated in the 2013 deal. Such “Club” Deals have fallen out of favor since the financial crisis, as firms increasingly prize their independence. Private equity group KKR agreed to buy US enterprise software company BMC from a consortium of rivals including Bain Capital and Golden Gate Capital for $8.3 billion.

Finally, the most pertinent news involves the Walgreens Boots Alliance, the $70bn drugstore chain, receiving a buyout proposal from KKR (and friends) – a deal that would become the largest LBO transaction recorded.

There are several reasons why Club Deals may experience an upturn in the near future. A first, and conceivably most prevalent, point is the enormous level of dry powder within PE and Club Deals deliver the opportunity to deploy large amounts of sidelined capital. As individually-reachable investment worthy target candidates become sparse, investment houses may find better risk/return profiles by scaling the value spectrum. Secondly, numbers don’t lie. Despite some bad press, large Club Deals ($1 billion +) have outperformed sole-sponsor buyouts over the past years. 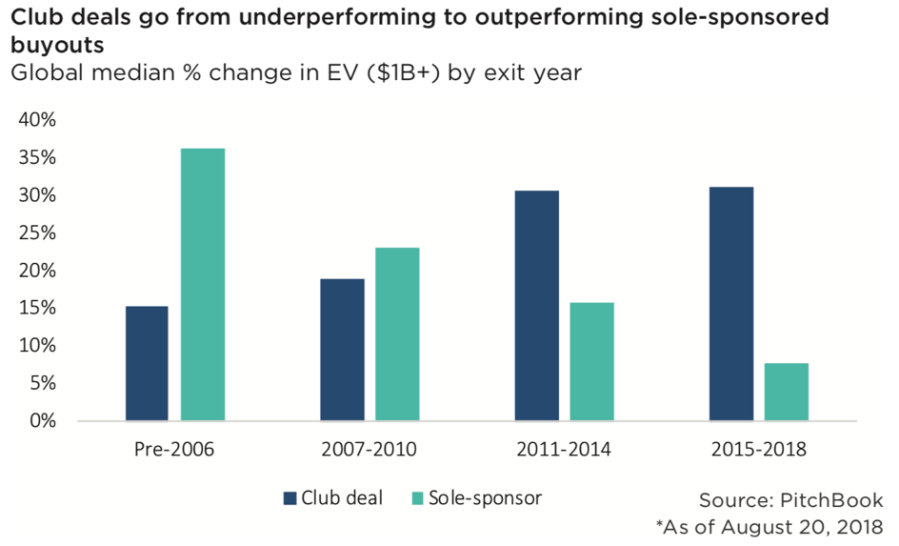 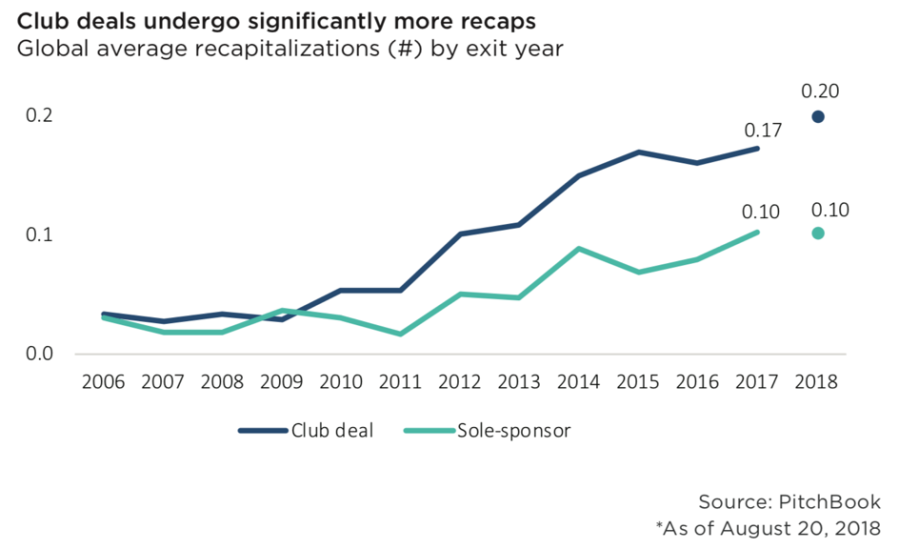 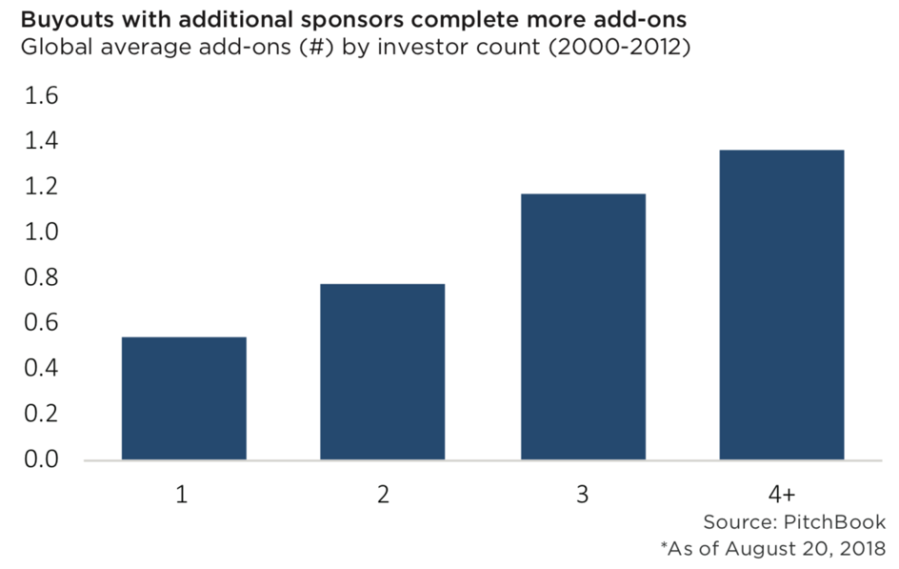 Thirdly, although there have been several infamous failures involving Club Deals, consortium targets are historically about 50% less likely to go out of business or bankrupt than sole-sponsor deals. However, we must include the caveat that this result may be influenced more by the relative size of the target rather than the fact that they are owned by a consortium (in that large companies could be less likely to fail due to the larger absolute loss in bankruptcy and therefore may be more prone to a sale for a loss or acquired by a sole investor in the consortium in which it subsequently goes bust).

It is through these rationalizations that the once-celebrated, now besmirched, Club Deal exhibits some unique advantages and characteristics. A current PE market beset by excess capital may be able to utilize this construct splendidly. Therefore, if investors manage to tune out the negative perceptions about Club Deals, the method may evolve into a real alternative for handsome returns.