The American alternative investment firm Blackstone Group is raising a new real estate fund. The Blackstone Real Estate Partners (BREP) IX could be the biggest real estate fund ever with a volume of $18 billion adding to Blackstone’s massive existing real estate portfolio of $119 billion AUM. It will be a crucial step for the business moving forward, as the fund will be the first big challenge for the recently promoted leadership team of the real estate business after former head of real estate Jon Gray got promoted to President and COO of the firm. The new team has the chance to prove that it can continue the excellent opportunistic real estate investing that Blackstone has been doing for the past 27 years. The push comes during very favourable market conditions, which might enable the company to close the fundraising by the end of the year. Low yields on core assets and low interest rates have made opportunistic real estate even more interesting for investors with a lot of dry powder and great appetite for high, risk adjusted returns. BREP IX (like its predecessor) will be a global real estate fund that targets mostly opportunistic investment opportunities and will in addition to targeting its core market the USA, focus on investments in markets that present good entry opportunities.

Opportunistic investments are the foundation of Blackstone’s real estate

The real estate business of Blackstone arose from one of the joint ventures that Stephen Schwarzman, one of Blackstone’s founders, created together with senior professionals within the financial industry. Established in 1991, it has taken a big part in the company’s journey to become the world’s most successful alternative investment firm. Over the years, the company was able to increase its AUM of real estate assets constantly and at a very high pace. The first fund with a volume of $480 million targeted opportunistic investments, aiming for high returns by buying real estate for a price ideally under replacement costs, adding value by fixing problems that were apparent at acquisition time and selling the object to investors looking for stabilized properties. This strategy has produced strong returns early on and enabled the company to grow the fund volume to $15.8 billion for their most recent global fund BREP VIII. Over the years Blackstone’s opportunistic funds undertook some of the biggest deals in the PE universe like the acquisition of Hilton Hotels & Resorts ($20 billion) or Equity Office Properties Trust ($39 billion) in 2007. Although those investments came at bad times right before the real estate crisis in 2008, the company proved that it can turn investments that are closed right before recessions around by netting in $20 billion of profits on the two deals. This expertise in value creation and the execution of opportunistic investments is the foundation of Blackstone’s real estate business. The ability to invest large sums of money while still producing high returns has been very important to the firm, because it enabled Blackstone to leverage those capabilities into establishing a variety of different products. The resulting products are Core Plus investments into real estate where lite value creation is possible, while simultaneously profiting from stable cash flows or investments in debt and other fixed income products that target the real estate market. 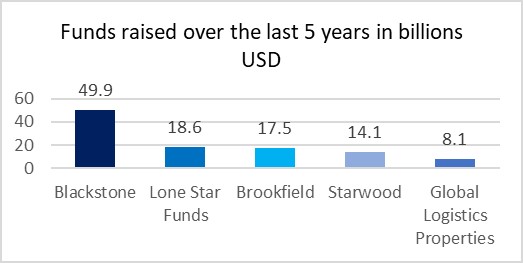 The growth of the funds together with the expansion into different regions and products are the factors for Blackstone’s success. Over the last 8 years, Blackstone was able to six-fold its real estate revenues, becoming the most important line of business for the company. Over 40% of the company’s revenues during the last 3 years were generated by real estate – 50% more than their classic buyout business. Earnings are also dominated by the real estate business, producing 45% of total income over the last three years. Furthermore, Blackstone’s real estate business dominates its peers by raising almost $50 billion in funds over the last 5 years with the second-best fund raiser Lone Star just receiving 18.6 billion over the same time span. This is possible, because like no other firm in the industry has the ability to launch very large fund vehicles. The four biggest funds that have ever been risen in the industry are all funds managed by Blackstone. If BREP IX is successfully raised, the fund would be twice as big as the biggest real estate fund raised by any of Blackstone’s competitors, the highest of which being Brookfield’s second strategic real estate fund ($ 9.0 billion).

Past success was achieved under the leadership of former head of real estate Jon Gray, who was recently appointed to COO, making room for a new generation of leaders in the form of Kathleen McCarthy, who is responsible for fundraising, product creation and general operations and Kenneth Caplan who oversees investments. McCarthy, who was the mastermind behind Blackstone’s former major funding rounds like the record-breaking fundraising of the preceding fund BREP VIII, will now have to prove once again, that she can get big insurance, pension and endowment funds to invest their money in Blackstone’s products. However, she will have very good market conditions in her favour, as the company is a good fit for a lot of investors today, since the firm can invest large sums of money, while still producing high, risk adjusted returns. Even in times of high valuations Blackstone has shown that its excellence in value creation can lead to outstanding returns even when markets are going through slumps. Consequently, great performance will be expected from Blackstone, expectations that the newly assigned co-head of real estate Kenneth Caplan, who oversees the real estate investments will be challenged to meet. In times of reduced opportunities to buy real estate out of distressed situations, he and his team will need to find unique entry opportunities and ways to add value to the acquired properties. The success of BREP IX is crucial for Blackstone to solidify its position at the top of the class of the industry, as the opportunistic funds display Blackstone’s skills the most, enabling a major influence into other products. If the investment team will be able to continue this excellence, Blackstone’s real estate will have a bright future, putting even more pressure on its competitors during the next years.